The badger is perhaps the most easily recognised of our native mammals. Its bold markings proclaim its presence and its danger. ‘Old Brock’ of folklore is, like the fox, a figment of our cultural imagination. He is not the amenable character often portrayed in children’s stories, he is not warm, soft and cuddly, he is hard, aggressive and stubborn.

The badger lives in large social groups centred around a sett or setts.

Badgers prefer to live in mixed deciduous woodland with lots of undulations and open spaces, but in practice they set up home just about anywhere.

The sett is generally set into a bank, often with an Elder tree near by, Elderberries are a favourite food of the badger.

They tend to prefer to dig in areas where the earth is not too hard. 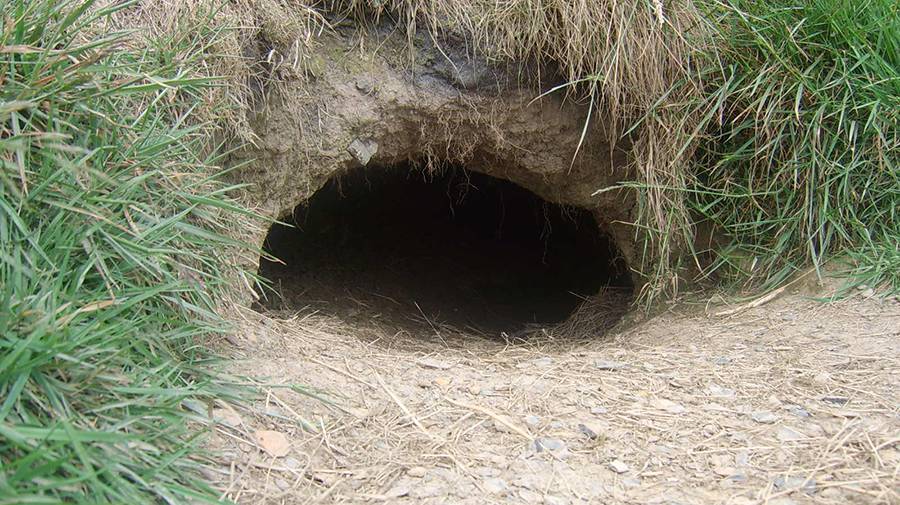 The sett is a series of underground tunnels and chambers, connected to the surface by a number of different entrances. Generally the sett is about 6 feet underground and can be very extensive, 20 to 25 animals may inhabit the sett during the breeding season, but 8 is the average for a sett.

There can be little chance of mistaking a main sett from say a foxes earth, or anything else for that matter. Typically it has a mound of earth, often mixed with bedding, outside of the main sett entrance.

The entrance is the shape of an egg on its side. The top and sides are often polished by the rough coats of badgers going in and out. There will be signs of recent digging, with foot prints and fresh earth on the surface.

If we travel into the sett we find lined sleeping chambers and even underground latrines. The badger is fastidious and clean, well organised and very much a creature of habit. One record sett had 180 entrances, 880m of tunnel, 50 nest chambers.

The sett may consist of one main set and several ‘outliers’. These may be used by members of the extended family group at any time and may even form the centre for a new family group.

The terrority or range of the badger will include the main sett, sub setts, and outliers. The range is often marked by a series of latrines (dung pits) these are holes about 4 to 6 inches deep filled and refilled with dung.

Around the main sett we should find polished paths leading to and from the main sett entrance and other entrances. Rubbing trees, scratching trees, play areas, often a forked tree with provide a hollow for drinking water.

The badger is nocturnal/crepuscular, appearing above ground at around dusk. The family then have what can be best described as a small social gathering, they play, they fight, clean themselves and then set of on a nightly feeding foray. This can cover as much as twenty miles.

They are true omnivores, they will eat just about anything. Much of their diet consists of earthworms, beetles, grubs, roots, bulbs etc. They are not averse to raiding the odd chicken house, very successfully, usually the fox gets the blame, but close examination will often demonstrate who the real culprit was.

The badger is a strong climber, he can scale surprisingly steep slopes, his powerful front legs can easily support his weight. Animals return to the main sett in the early hours, some may sleep in the other family setts within feeding range.

His life starts about July, or perhaps it doesn’t. The female exercises strategy called delayed implantation, this means that the fertised egg (Blastocyst) remains in the uterus without developing.

Delayed implantation can last from 3 to 10 months. One advantage of delayed implantation is that the young can be born when the chances of survival are greatest. The true gestation period is about 7 weeks, this is based on a ‘guestimate’ as birth takes place underground and is not normally observed.

The young are born from mid January to mid February, although births before and after are not unusual. The badger has just the one litter per year, varying from 1 to 5 cubs. The eyes open at about 5 weeks and they begin to appear above ground at about 8 weeks. Young badgers are playful and alert, although because their sight is poor when frightened they may dash off in any direction.

The cubs stay within the family group generally until they are mature at about 2 years old. More males than females disperse in the autumn. In a stable, high density areas, the family group may stay forever.

The badger has a sense of smell 800 times stronger than man. He belongs to a group called ‘Mustelidae’, scent bearing, his hearing is acute, eyesight rubbish. He is powerful, and uses traditional areas to forage and range over.

The family group has a dominant male and dominant female, when badgers fight they can inflict great damage on each other.

They can live up to 14 years in the wild, although many die on our roads. The badger has been subject to the attentions of man for centuries. Country sports have decimated badger populations in some areas.

The badger, and his sett are now protected. When watching badgers in the field it is vital that no interference with the sett, or badgers takes place. The full details can be found in the Badger Protection Act.

Isle of Wight Badgers and Persecution

Until the mid-eighteenth century badgers had been a stubborn inhabitant of Britain, though not of any of the offshore islands except Anglesey and the Isle of Wight. [Ref: 1] However by 1909 the badger was extinct on the island. [Ref: 2]

In the 1920s, Mr John Willis Fleming, the then Master of the Isle of Wight Hunt, became alarmed as an outbreak of mange endangered the whole fox population and hence his blood-sport. Taking advice from friends on the mainland, he imported a dozen badgers and turned them out. It’s not the first time the hunt had imported an animal to the Island, no foxes existed on the Island until the hunt imported them for ‘sport’. The badgers drove foxes away from their diseased earths and cleaned them, and the foxes were forced to open fresh earths. [Ref: 3]

The abuse of badgers and badger-digging are a constant threat to the Island population, there have been cases of badger-digging within the last few years. Snaring and sett interference are continual problems, ‘sett stopping’ can cause many problems for badgers.

1. ‘Wildlife in Britain and Ireland’ by Richard Perry
2. ‘A Guide to the Natural History of the Isle of Wight’ by Frank Morey
3. ‘The Isle of Wight Hunt’ by Michael Poland

Recommended reading: The Natural History of Badgers by Earnest Neal